Behind the Scenes at American Girl Place New York

Just last month, American Girl Place New York celebrated its grand opening at 75 Rockefeller Plaza! The stunning new flagship location welcomed more than 10,000 excited girls and their families during the store’s inaugural weekend, making the event as meaningful as it was memorable.

To herald the start of the grand opening weekend, American Girl and Mattel honored four influential women and girls who have demonstrated strong character by standing up for others, showing compassion, and raising awareness for a cause. These “Character Counts” honorees included author and philanthropist Jessica Seinfeld; actress and philanthropist Mariska Hargitay; Scarlett James, a cancer survivor and Memorial Sloan Kettering advocate; and Amaya Scheer, a tireless advocate for children entering the foster care system. As part of American Girl’s ongoing commitment to girls, “Character Counts” aims to help girls think about the kind of person they aspire to be and to empower them to be a positive force for change. 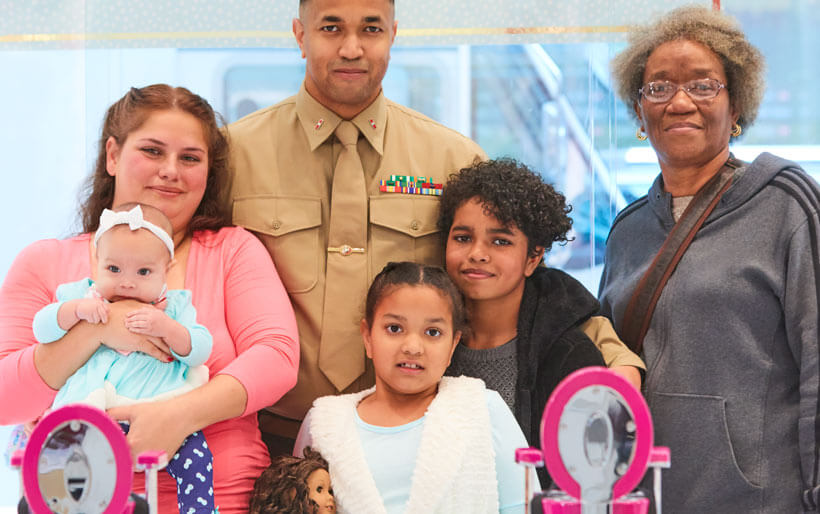 Through its partnership with the Red Cross’ Service to the Armed Forces (SAF) program, American Girl continues to support efforts to provide comfort and care to the nation’s military and their families. The grand opening at Rockefeller Plaza on Veteran’s Day weekend offered the perfect opportunity to arrange a special surprise reunion for one such family. USMC Chief Warrant Officer Brian Johnson, dad to three daughters and currently on a one year unaccompanied tour in Japan, told his wife he’d entered them into a Red Cross military contest to win a trip to NYC and be among the first to experience the new American Girl store—the perfect set-up to the surprise! American Girl worked with the TODAY show to capture their heartwarming reunion. Additionally, the New York store—as well as all American Girl stores throughout the U.S.—will continue to collect donations, which American Girl will match, for the American Red Cross Service to the Armed Forces program through December 31, 2017.

The new American Girl Place New York store offers an experience unlike any other, a community where girls are central and creativity, purpose, and play come together to make every day a celebration.

Plan a visit to see for yourself all that it has to offer!