Liquid error: Could not find asset snippets/locksmith.liquid Girls Discover They are Twin Sisters

More faves to save on today Shop sale

Audrey and Gracie were separated at birth and adopted by two families living nearly a continent apart. Ten years after their adoption, the surprise discovery that the girls were twins led their families to reunite them. American Girl magazine editor Melissa Seymour had the opportunity to talk with the girls about their extraordinary story of love, family, and the joy of being a twin. Here is an excerpt from their interview, which appears in the November/December 2017 issue of American Girl magazine.

American Girl Magazine: What was your life like before you knew you had a twin?

Gracie: My life was really normal but super busy because I had soccer tournaments and basketball tournaments. Now I’m still doing all those things, but I’m even busier.

Audrey: It was pretty normal. I did gymnastics and played with friends a lot.

AGM: Describe the moment you discovered you had a twin. How did you find out?

Gracie: My mom showed me a picture of Audrey when she was little. She thought it was me, and I did, too. My mom was asking if it was me in the picture. I said, “Yes, it’s me, Mom.” But it was Audrey! Later my parents were upstairs on the phone with Audrey’s parents for an hour. Then my mom called me upstairs, and everyone in my family was in our living room and they told me!

Audrey: My mom said she had a surprise after gymnastics and showed me a picture of Gracie. I thought it was a joke and that she was kidding. I could tell it wasn’t me in the photo because I have a mole near my mouth and on my forehead, but the girl in the photo didn’t.

AGM: What was running through your head?

Gracie: I was thinking, what the heck is going on?! I was really happy, but it was also really weird.

Audrey: I was happy and in disbelief.

AGM: You met each other for the first time, in person, on TV. What was that day like for you?

Gracie: I was super excited to meet Audrey but also really nervous. After the show, we went to a brunch and had chocolate chip pancakes. Later that night, we had a sleepover in Audrey’s hotel room and played games on her tablet.

Audrey: I was really nervous and a little eager. It felt like it took forever to get to our segment on the TV show, but it was worth it! When I met Gracie, I was really happy. I loved meeting Gracie and being on TV. I also liked going to the American Girl store in New York City.

AGM: How did your life change after you found out you had a twin?

Gracie: Audrey and I talk on video-chat all the time. I kept thinking, “Oh my gosh, Audrey is so much like me.” She likes the same foods as me. She even acts the same as me. I found that out when we sent videos to each other.

Audrey: I get to go more places to visit her, and when I’m bored, I can call her. Also, when we see each other, it’s fun to play with her and get to know her better.

AGM: In what other ways are you similar?

Gracie: We both wear glasses and love sports. We’re both weird and funny. And we both like macaroni and cheese and alfredo sauce. We love dogs, and we talk the same and laugh the same. We both have a heart condition. We’re both obsessed with math, and we love scary amusement park rides.

Audrey: We have almost the exact same glasses. Mine are pink on the inside, and Gracie’s are blue on the inside. We both like wearing our hair in side ponytails! We have the same number of siblings, and we’re both the youngest. We both have dogs. 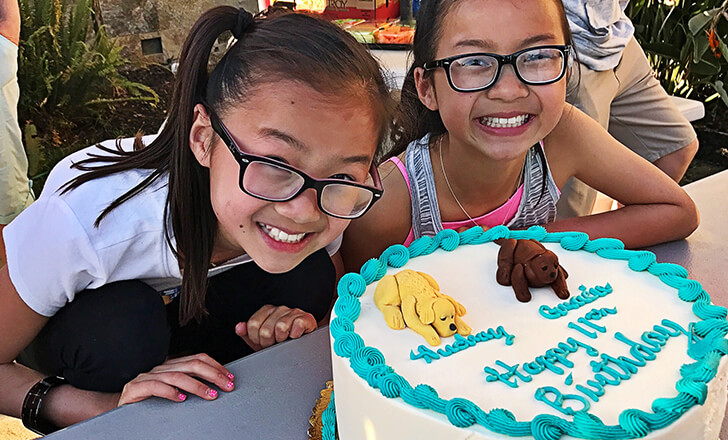 AGM: How are you different?

Gracie: Audrey is a lefty and I’m a righty. Audrey does gymnastics, and I play soccer. She does yoga, and I play basketball. Audrey plays the violin, and I used to play the marimba. I’m a little taller than Audrey and I have bigger feet.

Audrey: I like to wear dresses and Gracie doesn’t.

AGM: What’s the best part about having a twin?

Audrey: Getting to know her better each time we talk.