Liquid error: Could not find asset snippets/locksmith.liquid Girl of the Year 2023: Why Kavi Matters | American Girl

Kavi Sharma, 2023 Girl of the Year, is an Indian American girl growing up in New Jersey who loves singing, dancing, and performing with her friends. Between schoolwork, dance and music classes, time with family, Saturday yoga, and hanging out with friends, Kavi has a full plate.

When Kavi’s grandmother takes her to see Wicked on Broadway for her 12th birthday, Kavi becomes even more excited to pursue her dream of performing onstage. As she rehearses for her school’s talent revue and takes on new responsibilities at home, Kavi learns important lessons about balance. 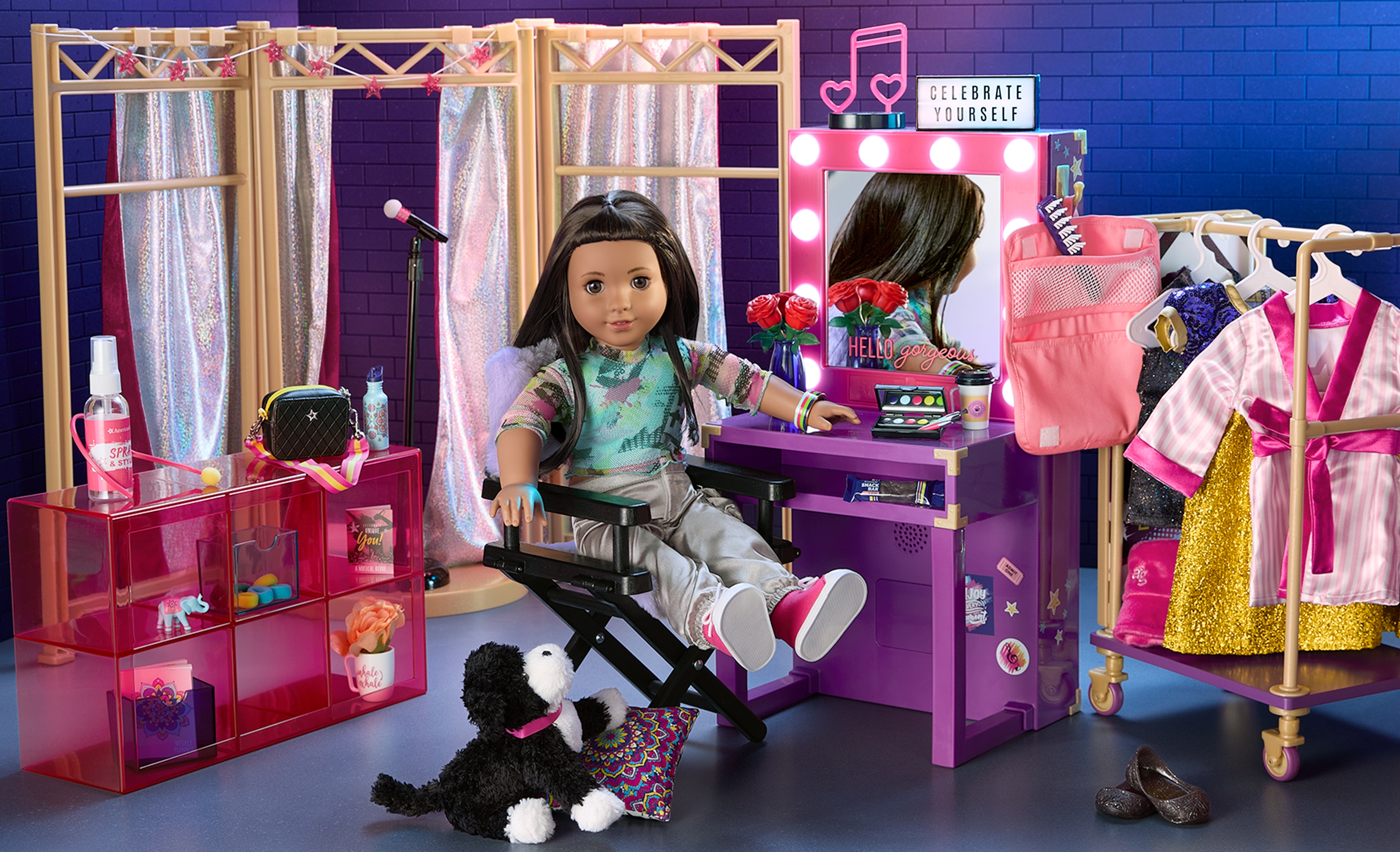 Like many girls today, Kavi is passionate about the things she loves. Kavi learns a lot over the course of her story, and can teach girls these important lessons:

Kavi loves to perform, whether it’s playing the keyboard, singing, or dancing. Her little brother, Rishi, who wants to be a doctor one day, diagnoses her with “superstaritis.” The school talent revue is Kavi’s first opportunity to show her talents to a large audience, and she discovers that a good performance takes a lot of hard work and persistence. Ultimately, Kavi is able to let her talents shine and take a step toward her dreams.

Kavi dreams of attending Princeton University like her dad, so she wants to get good grades and take advanced classes. But between the talent revue at school and new responsibilities at home, Kavi soon finds herself overwhelmed. Her parents help her find a balance among all her activities, including a regular yoga practice to calm and focus her mind.

Be proud of who you are

Kavi’s family celebrates their Indian American culture through dance, food, clothing, and holidays. Kavi takes weekly classes in classic Indian dance, and her favorite holiday to celebrate with her family is Diwali, which lasts five days every fall. Kavi also shares her culture in meaningful ways with her friends and classmates.

Author Varsha Bajaj brings the experience of Indian American girls to life in Kavi’s story. Here’s what she has to say about writing Kavi’s story:

Why is Kavi’s story important?

Kavi is a trailblazer as American Girl’s first Indian American doll. The story is important to all the young girls who will see parts of their lives represented. Stories can be both mirrors and windows, allowing readers to see themselves and others who are different from them, and I hope that Kavi’s story is a welcoming window for girls who might be unfamiliar with Kavi’s world.

What was it like creating the first Indian American Girl of the Year?

It was a privilege that I didn’t take lightly. I grew up reading stories written by Western authors, and this was my chance to invite readers into my world. One story cannot possibly depict the complexity of India or the Indian diaspora. That said, I took immense delight in showcasing slivers of Indian culture, including dance, yoga traditions, food, clothing, and the many languages and diversity of India’s people. It was a gift to include Kavi and her family celebrating magical festivals like Diwali and Holi.

What else would you like readers to know about Kavi?

Kavi overcomes challenges by seeking help from her family, her community, and professionals who are there to support her. Our differences can be our strengths! Kavi isn’t sure how her differences will affect her future, but she doesn’t let her difficulties defeat her. She tackles her problems and strives to find and nurture her talents.

What part of Kavi’s story is your favorite?

Kavi’s special connection with Dadima (her grandmother); Kavi’s excitement when she attends her first Broadway show; and her dog, Scamper, are all endearing. My favorite part, though, is Kavi’s singing and dancing. 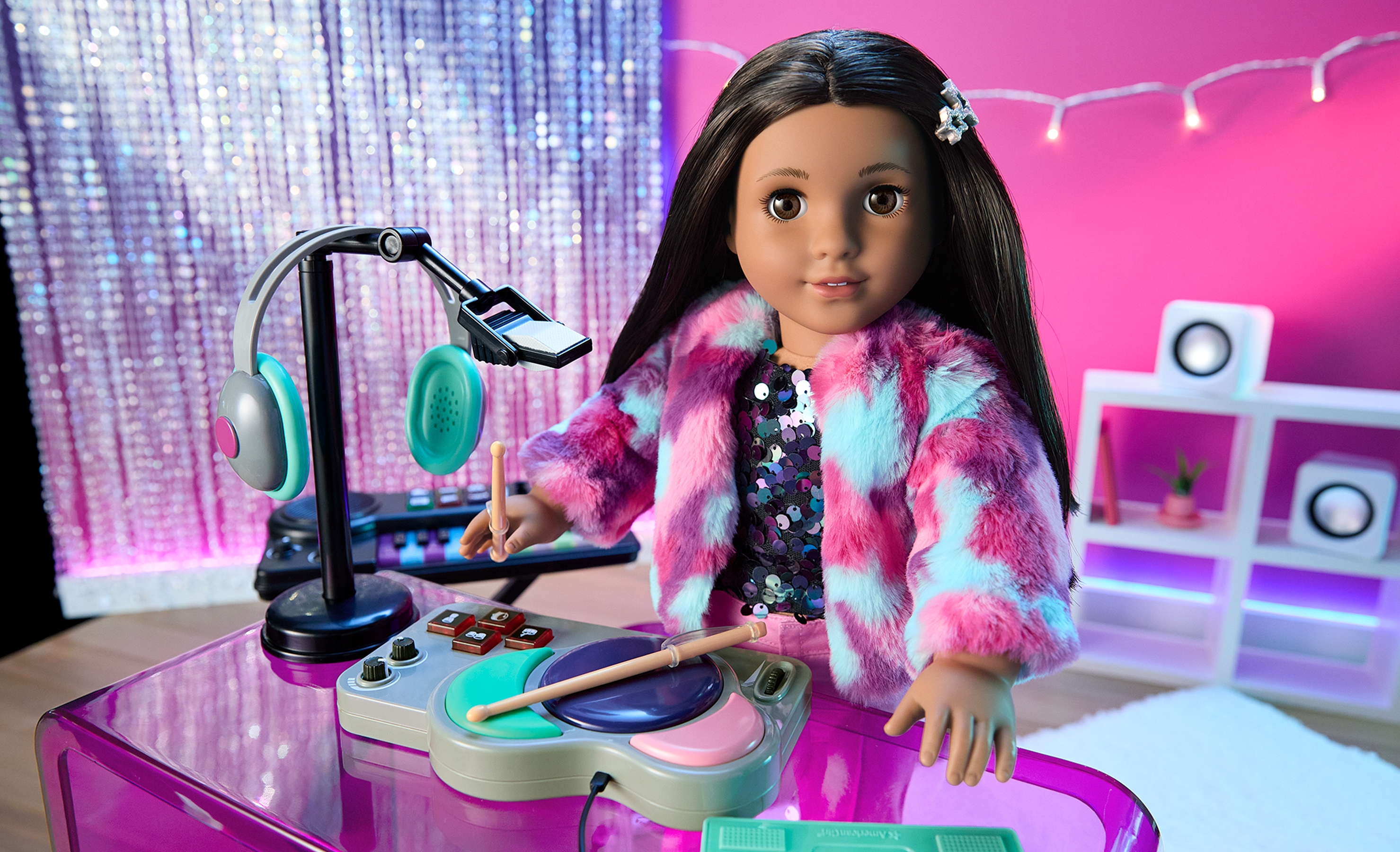 Kavi was created with the help of a team of advisers, who each found something special in Kavi.

Adviser Rina Shah is a choreographer and dance studio owner who specializes in classical Indian and Bollywood dancing. Like Kavi, she grew up in New Jersey, and she hopes that readers learn more about Indian culture through Kavi’s story. Rina says,

“It’s wonderful how Kavi handles being a part of a wider world, and fits her Indian culture into her daily American life, and how the book shows the increased non-Indian interest in Bollywood.”

Arusha is a 12-year-old Indian American girl who, like Kavi, takes classical Indian and Bollywood dance lessons. Arusha advised American Girl on the project and felt pride in helping to represent Indian culture. She says,

“Kavi’s story reflects the real world, and I can relate to many of the events, such as Bollywood dancing, celebrating Indian festivals like Diwali and Holi, going to Broadway shows with my grandparents, practicing piano, and walking through the Princeton campus after getting ice cream at my favorite shop! But, if I had to choose, my favorite part would be when Kavi celebrates Diwali with her family as it reminds me of all the good times I’ve had with my family.”